Role of the PCC

What does your Police and Crime Commissioner do for you?

Click the image to zoom in and find out more 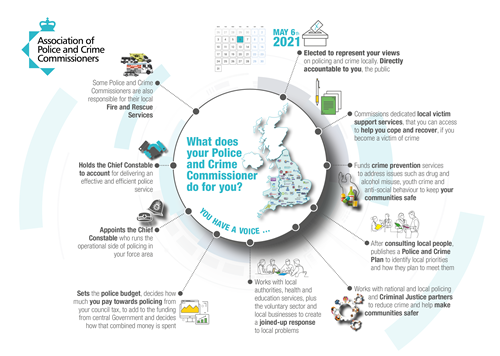 Role of the PCC and his/her Office:

The role of the Police and Crime Commissioner (PCC) is to be the voice of the people and hold the police to account. They are responsible for the totality of policing.

PCCs aim to cut crime and deliver an effective and efficient police service within their police force area. They are elected by the public to hold Chief Constables and the force to account, making the police answerable to the communities they serve.

PCCs ensure community needs are met as effectively as possible and are improving local relationships through building confidence and restoring trust. They work in partnership across a range of agencies at local and national level to ensure there is a unified approach to preventing and reducing crime.

Under the terms of the Police Reform and Social Responsibility Act 2011, PCCs must:

In three police force areas currently- Greater London, Greater Manchester, and West Yorkshire - police governance falls under the remit of the Elected Mayor. The Elected Mayor may appoint a Deputy Mayor for Crime and Policing to exercise functions on their behalf. More detailed information on PCC powers and responsibilities is also available on the Home Office website.

PCCs are expected to adhere to the Seven Principles of Public Life, as determined and published by the Nolan Committee - the 'Nolan Principles'. Each PCC publishes their own Code of Conduct but the APCC has drawn up an ethical framework, which was led and developed by Police and Crime Commissioners themselves and which includes a template Code for PCCs to adopt if they wish.

More recent additions to the PCC role and remit:

Over recent years the role and remit of PCCs has been developed and strengthened through both changes in legislation and in recognition of the success of the role. New or increased functions and powers include:

Following extensive consultation, a package of reforms to the police complaints and misconduct system was developed by the Home Office and the Independent Office for Police Conduct (IOPC). These reforms form part of a process of overhaul of the complaints and discipline system that were outlined in the 2017 Policing and Crime Act and came into effect on 1 February 2020. As part of this work PCCs gained a new stronger role in the complaints system, with an option of taking on one of 3 different levels of complaints against the police. Model 1 (which must be adopted as a minimum standard ) involves oversight of the complaints  system. Model 2 is an informal and resolution role and Model 3, is where a PCC deals with all statutory duties and responsibilities for complaints

The Policing and Crime Act 2017 further reformed policing and enabled important changes to the governance of fire and rescue services.

Under the legislation PCCs can either be involved with their local Fire and Rescue Authority.

Alternatively, PCCs can consult the public and local partners and submit a business case to the Home Secretary seeking to take on the governance of Fire and Rescue services in their area. This option formally creates a Police, Fire and Crime Commissioner (PFCC).

In addition to commissioning services for victims, some PCCs may have taken on extended commissioning responsibilities. This may include working with local partners to commission reducing reoffending services, youth diversion schemes, drugs, and alcohol services etc as well as funding local Community Safety Partnerships.

PCCs in 18 areas lead in the commissioning of multiagency Violence Reduction Units, bringing together strategic partners to deliver system wide interventions to prevent and reduce serious violence. Some PCCs have been successful in bidding for the Government’s Safer Streets funding and other funding streams working with local strategic partners to determine where this money might be most beneficial, and ensuring it deliver real impact on the ground.

What you need to know as a PCC (apccs.police.uk) contains further information on:

The table below shows the variance in salary for PCCs:

The mayoral areas of London, West Yorkshire and Greater Manchester are not bound by the PCC salary bands.

The Role of the Office for the PCC (OPCC):

Across England and Wales, there are many variations, in both size, structure and configuration of the OPCC staff structure. These variants reasonably reflect local determinants and the different priorities of individual PCCs elected on different local mandates.

Notwithstanding the local variations in office structure, by law all PCCs must employ a Chief Executive / Monitoring Officer (CEO) and a Chief Finance Officer. These are known as the two statutory officers.

Every PCC must have a CEO in post who will support and advise the PCC and assist in the discharge of all their statutory duties. The CEO occupies a critical position in the OPCC. They have responsibility for ensuring the effective implementation of the PCC's strategy and effective use of the PCC’s resources, compliance with the full range of statutory duties and responsibilities, and the setting and maintenance of high standards of conduct in accordance with the Nolan principles.

The Chief Executive is also the ‘Head of Paid Service’. The role of the Head of Paid Service is to determine how much resource is necessary and how many staff are required, in order to manage and deliver the priorities requested by their PCC and effectively discharge the statutory responsibilities of the PCC and his/her statutory officers

The CEO will typically work closely with the PCC, the Chief Constable (CC), the Chief Finance officers (CFOs) in the OPCC and Force, and with other senior managers to ensure delivery of the PCC’s vision, strategy, and priorities. The CEO will also ensure rigorous scrutiny of the police force’s activities in support of the PCC’s statutory duty to hold the CC to account. The CEO also ensures the effective strategic and operational leadership of the OPCC. Depending on the delivery model in operation, the OPCC may hold a range of functions that provide services to the PCC, the force, and other agencies such as the local Fire and Rescue Service.

The role of the OPCC is to support the statutory functions of a PCC, with a key focus on supporting delivery against the local Police and Crime Plan.

A PCC can choose to set up their office structure according to their local and regional requirements. However, it is important to understand why a given staffing structure has developed and that is why it is considered impractical and to try to directly compare one OPCC structure with another.

Levelling up accountability and effectiveness of policing, crime fighting and justice in England & Wales.

What you need to know as a PCC

A reference guide which includes information, insight and tips on a PCC’s statutory responsibilities.

Use our simple tool to locate the PCC in your area